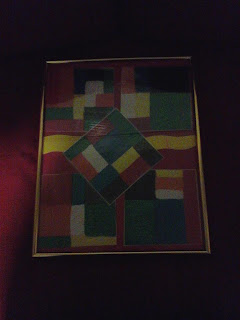 2 friends connect with art — and Africa
Jolyn Gardner Campbell and Shurvon Haynes are artists who share an interest in community that drew them to a project called Artists 2 Africa, which uses art to make connections between Africans and Americans.


Sometimes young people have to struggle to find work, but many of those who do find it want not just a paycheck, but a chance to do something they believe is good and meaningful.
That desire isn’t unique to a particular generation, but believing it can happen seems more common today than a generation or two ago, and so does the willingness to give up security to pursue dreams down one avenue after another en route to work that fits who they are.
Jolyn Gardner Campbell was a prosecutor and her friend Shurvon Haynes was a journalist; but they’re both artists now. They’re examples of that desire to find their own best fit, something they feel good about. They share an interest in community that drew them together in a project called Artists 2 Africa that uses art to make connections between Africans and Americans.
Campbell decided to become an artist after taking an art class at Seattle’s Rainier Beach High School, but she changed direction because several teachers and a judge were impressed by her performance in a mock trial and urged her to go into law.
She got her B.A. from Western Washington University in the law and diversity program and graduated from the University of Illinois College of Law in 2006 with a job offer from the King County Prosecuting Attorney’s Office.
Campbell went into the job loving the idea of being a prosecutor, but she only stayed two years. In juvenile court, she said, it hurt “seeing those kids, and a lot of the time I had to recuse myself because they were kids I went to school with, or I knew their parents, or I just was too close to the family that I was assigned to prosecute.
“It was hard,” she said, “to constantly see people who I knew in some way in court, sometimes in shackles and in chains.”
She decided she couldn’t continue and turned to more creative interests. She led art tours, got together a women’s drum circle and painted. She still practices law, but now it’s contract and entertainment law.
Haynes found newspaper work wasn’t as fulfilling for her as she thought it would be, so she decided to explore her long interest in the visual arts by enrolling in the Art Media and Culture interdisciplinary program at the University of Washington, Tacoma. “The media was where I was going to use my journalism skills, the culture was going to be where I talked about social change, race, things of that nature that would connect my writing with society,” she said. “The art thing, I still wasn’t sure how I was going to include that.”
The question about art was answered for her at a book reading by UW-Tacoma professor Beverly Naidus, who wrote “Arts for Change: Teaching Outside the Frame.” Haynes’ appreciation of art had leaned toward the aesthetic, but the book and her classes gave her the freedom to address social issues through art.
After graduating in 2011 she created a blog where she displays her work and writes about art and culture.
Campbell, who has won awards for her art, was invited to participate in Artists 2 Africa and partnered with Haynes.
I’ve written in the past about other Americans’ efforts to maintain ties with Ireland, with countries in Scandinavia and Latin America, Asia, the Middle East. It’s harder to bridge bonds so severely strained as those between Africans and African Americans, cleaved apart by slavery. Which of the dozens of countries would an African American look toward?
But across history some people have made connections despite the difficulty. Having a connection to deep roots gives people strength. I’m certain that knowing an honest version of their heritage, in this country and before, would have changed the paths of some of those young people Campbell got tired of seeing in jail. You can’t visit Africa and come back using the N-word to refer to yourself or your brothers.
Artists 2 Africa is a small-scale project, the kind that doesn’t require wealth or a big organization, just a few people willing to throw their pebble into a pond. The world runs on the little things that individuals do.
Ten artists from the United States will travel in October to Ghana, where they will exchange techniques with African artists. It’s the second year of the project, which intends to visit a different country each year.
Haynes’ and Campbell’s project is a mixed-media International Art Quilt, made of 5-inch-by-5-inch squares, each of which will represent the story or message of an American who is interested in Africa or African art. They’ll leave that artwork in Africa and ask Ghanaians to contribute squares to a quilt they plan to bring back to Seattle and donate to the Northwest African American Museum.
Campbell and Haynes have been going to local events talking about the projects, and creating squares representing those events. You can find out more about the project at Campbell’s website on indiegogo.com.
Haynes told me she’s always decorated her living space. “If I didn’t see anything in the store that either I could afford or that had my vision, I would just create it myself.” They’re both doing something like that with their lives.
Jerry Large’s column appears Monday and Thursday. Reach him at 206-464-3346 or jlarge@seattletimes.com 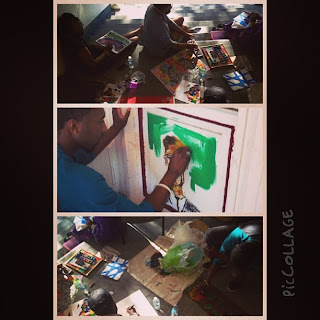 FINEARTS BY SHURVON ALICIA, The Fine Arts Visionary!!!! at Monday, July 29, 2013 No comments:
Email ThisBlogThis!Share to TwitterShare to FacebookShare to Pinterest

THE GULLAH GULLAH FESTIVAL WAS AMAZING...SEE THE PHOTOS AND VIDEOS BELOW FOR MORE DETAILS! 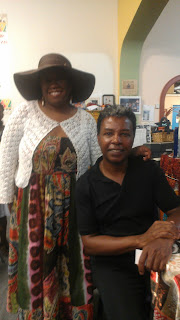 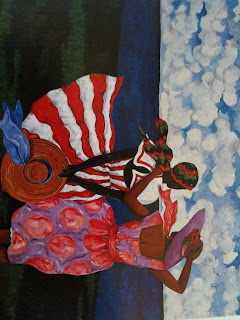 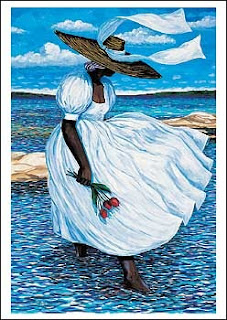 THE GULLAH GULLAH FESTIVAL WAS SUCH A BLESSED EVENT, I WAS SO GLAD TO MEET ARTIST JONATHAN GREEN AND LEARN MORE ABOUT THE HISTORY OF THE GULLAH ISLANDS AND RICE PLANTATIONS!