The Essential Elements of the 2020 In The Presents of Black Art, the results of the creative quarantine. Revised, Remixed, Redetermined and Refocused!!!!
Stay tuned for more details 👁️ 🖤🎨 the journey continues...🏁🏁🏁🏁
FINEARTS BY SHURVON ALICIA, The Fine Arts Visionary!!!! at Wednesday, July 01, 2020 No comments:
Email ThisBlogThis!Share to TwitterShare to FacebookShare to Pinterest
Labels: 2020 Creative Quarantine 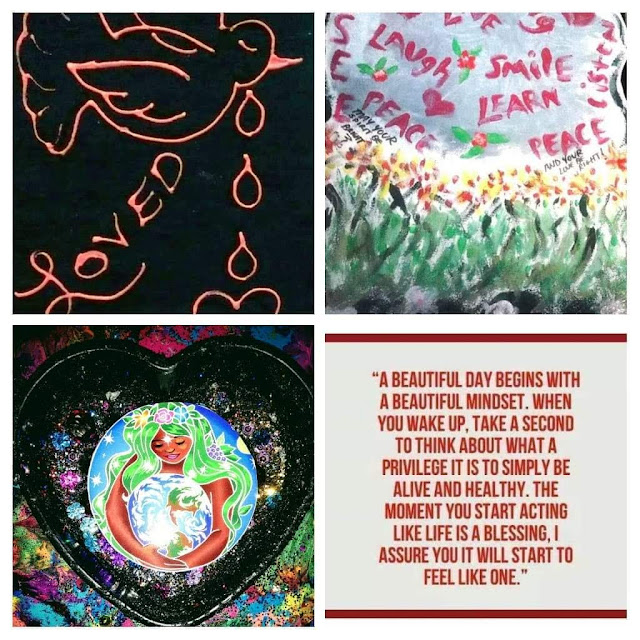 THE  2020 DECADE OF DECLARATIONS

We Love Our Humanity

We Believe in Ourselves

We have made Important Contributions
to the
World Everyday

God has given us Hope for the Future

Our Lives are Worth Saving

We Have Healthy Minds

We have a beautiful presence in our colorful universe
bringing a solid foundation
to the generations of people
we are inspiring to
LIVE THEIR LIVES ON PLANET EARTH
with
Natural Strength, Powerful Courage,
Educated Wisdom, Loving Self-Care,
Spiritual Development, Focused Faith,
Economic Wealth and Good Health!!!!
=
WE ARE GRATEFUL AND THANKFUL TO THE LORD GOD ALMIGHTY!!!!
FINEARTS BY SHURVON ALICIA, The Fine Arts Visionary!!!! at Wednesday, April 22, 2020 No comments:
Email ThisBlogThis!Share to TwitterShare to FacebookShare to Pinterest
Labels: EARTH DAY 2020

'2020 In the Presence of Black Art is still on the agenda, I just had to adjust the creative schedule according to our current society challenges...stay tuned for more information about my new series at www.blackartdesignerfashion.com

In the meantime I am participating in the #PAINTPRIL CHALLENGE that was designed by the infamous Aramis Hamer @mis_liberation. Everyday artists from all over the world can upload an image that connects to a daily theme.

#PAINTPRIL has really helped restart the creative process for my new series '2020 in the Presence of Black Art'  that was interrupted by the corona quarantine. I've rediscovered some old/new ideas that can be revived according to our new normal. Each image is combination of my original artwork, personal memories and favorite items that relate to the daily #paintpril theme.

Visit on my website on April 29th at www.blackartdesignerfashion.com to see the first set of images of the '2020 in the Presence of Black' series from SHURVON, THE FINE ARTS VISIONARY!!!! #PAINTPRIL

Creative contributions from Shurvon, The Fine Arts Visionary at
www.blackartdesignerfashion.com
to the APRIL 2020 #paintpril challenge on instagram. 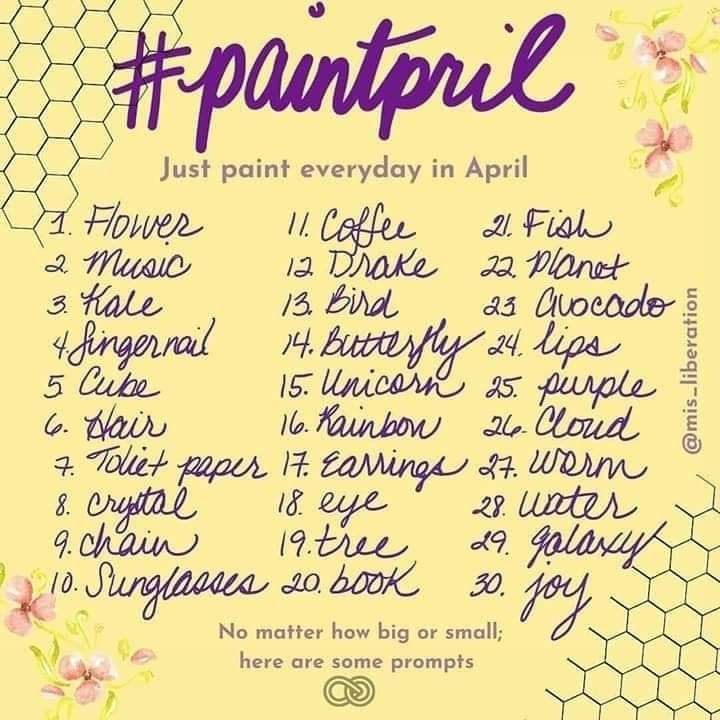 www.blackartdesignerfashion.com for #paintpril on Instagram.
FINEARTS BY SHURVON ALICIA, The Fine Arts Visionary!!!! at Monday, April 06, 2020 No comments:
Email ThisBlogThis!Share to TwitterShare to FacebookShare to Pinterest
Labels: #PAINTPRIL

'2020 In The Presence of Black Art' is a celebration of our existence in the universe as People of Black African descent. We are thankful for our humanity, gifted talents and love for each other. It is an acknowledgement of our self-worth and contributions to a society that has tried to decrease our human value.
Yet, through it all, we are here because we survived, we overcame and we conquered another day in an effort to live our best life
in faith. Faith in the true and living God,
who gave us the ability to believe in His purpose and plans for us to be fulfilled.
This new fine arts exhibit is the completion of a five year explorative journey into the art world as a young African American Woman from the historical Central District Community.
In the early 1990's gentrification started to change the Black community, it was during this time when I noticed that the respect for our civil rights was ignored. Our historical contributions to this global society were often overlooked and disregarded as not important...but that was not the final conclusion for Black People living on planet earth. We were predestined to prosper abundantly in our health, wealth and personal development.

The majority of Black People in America are the descendants of their enslaved African Ancestors who were brutally captured by european colonizers more than 400 years ago and brought to the Americas and forced to be chattel slaves. It was at this time in our global society that the Original African people begin to see themselves as inferior and their healthy self-esteem begin to fade. They became sad, depressed, fearful and hopeless from the extreme cruelty of racism.


Despite the challenging circumstances they endured on a daily basis, they were able to continuously build a foundational legacy from their natural gifts and talents. That paved the way for future generations to expand their human potential in this world.

Therefore, I decided to redefine my vision of the Black experience through fine art, starting with our royal legacy on the continent of Africa to our current citizenship as Black African Americans in the United States.
The '2020 In the Presence of Black Art' series concludes my five year quest of trying to personally redefine the meaning of fine arts theory. There will be a total of 10 images made for this new art exhibit. The first image will be revealed on February 29, 2020 on my social media channel. Stay tuned for more details about this exciting artwork titled, 'Tribal Legacy,' inspired by the '85 to Africa' album from singer/rapper Jidenna.

5 QUESTIONS
The official art process will start on the 20th of each month from February to October. Each image will have its own identity to inspire, uplift and celebrate our Beautiful Blackness.
The knowledge of understanding in regards to our reality comes from being in the presence of different categories of Black Fine Art.
Giving us a physical, mental, spiritual and emotional connection to artistic expression.
The reason I chose those specific calendar months to reveal the official artwork from this new series was because both my mother and maternal grandmother were born in the month of February and I was born in October. Therefore, I believe it was predestined for me to start this artwork during the same month that we also celebrate Black African-American History in the United States.

Jidenna's '85 to Africa' album is an original and authentic musical story. He found it necessary to travel back to the continent of Africa in an effort to revive his own culturally creative musical gift organically. When I listened to this album, I was motivated by the style and vibe of each song. The first image from my new art series was named 'The Tribal Legacy' in honor of the African Diaspora.

I am a descendent of my African Ancestors who survived the slave trade and racial injustice in the United States so that I could be alive for such a time as this. It is now my duty as Black African American Woman living in America to make a personal contribution to our historical legacy as a fine arts visionary. This legendary art series will articulate my dreams for the future of Black People of African descent in the whole wide world.

When I decided to reactivate my creative talent as a self-taught visual artist it was important for me to define visual art for myself, aside from what had already been researched in academic fine arts education programs. I had studied conceptual art ideas but I did not know or fully understand the basic fundamentals of art theory, art criticism and professionally trained drawing/painting techniques., Therefore I started my journey into the art world with a mission to just paint what I loved according to these four guidelines.
'2020 IN THE PRESENCE OF BLACK ART'
FEBRUARY SCHEDULE
20th ~ Introduction, Inspiration and Motivation..."the journey continues🏁!!!!"
Tribe (Instrumental Remix)
🎼
https://youtu.be/_oHlAw9tE3o
Jidenna's Original '85 to Africa' Album
🎼
25th ~ 2020 Musical Soundtrack Playlist and Preview Art Exhibits in Seattle!
~Happy and Healthy Mandala at the WaNaWari Art Center in the Central District neighborhood in Seattle.

~Tribal Journey at Gallery Onyx at the Pacific Place Mall in Downtown Seattle.

~The Wonderful World of Fine Arts Radio Show with Julius and Shurvon on www.rainieravenueradio.world

29th ~ VIDEO ART EXHIBIT PREMIER of the first official art image from this new series 'THE TRIBAL LEGACY' on my social media websites.

FINEARTS BY SHURVON ALICIA, The Fine Arts Visionary!!!! at Thursday, February 20, 2020 No comments:
Email ThisBlogThis!Share to TwitterShare to FacebookShare to Pinterest
Labels: 2020 In the Presence of Black Art, The Wonderful World of Fine Arts Radio Show with Julius and Shurvon on www.rainieravenueradio.world

The Healthy and Happy Mandala!!! 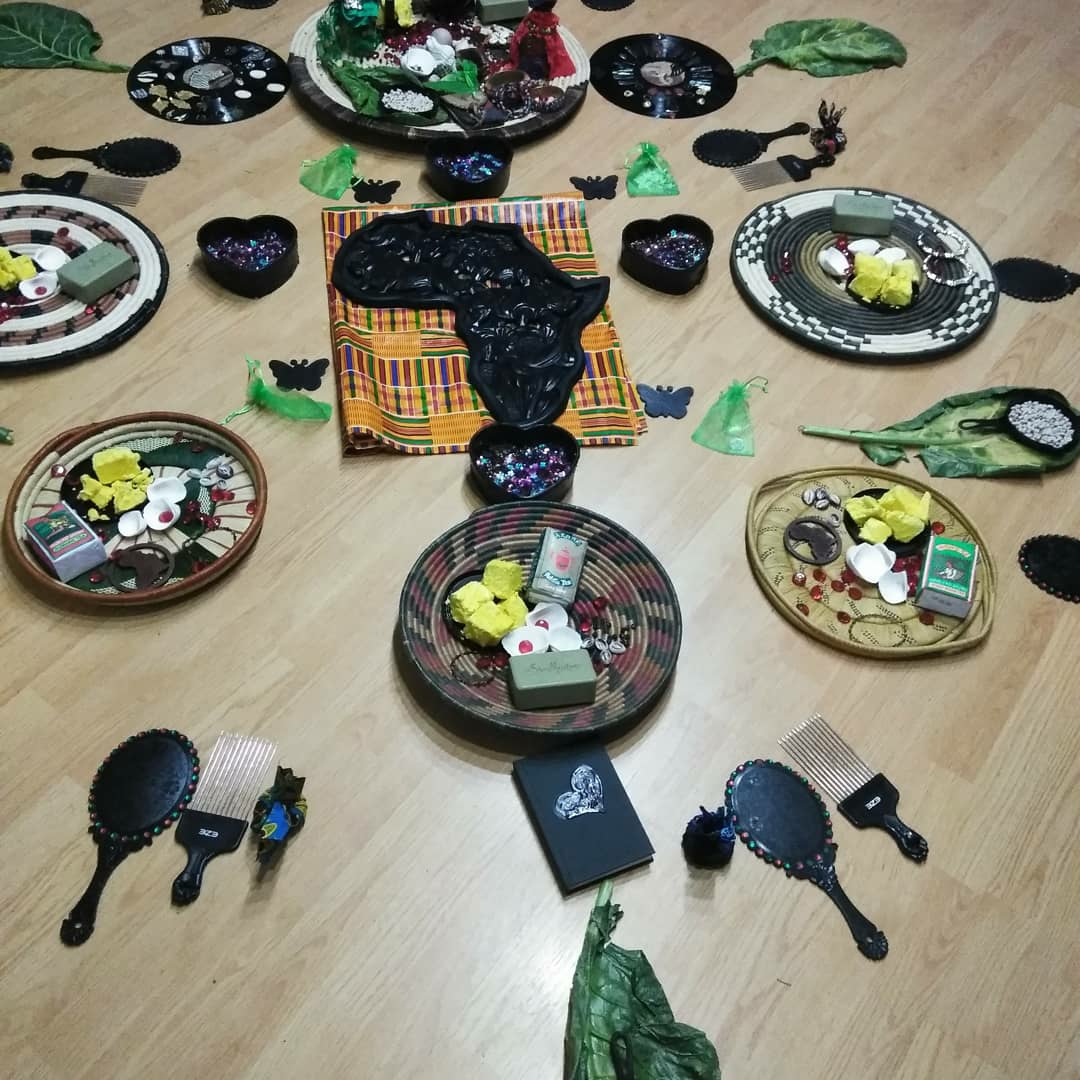 THE  2020 DECADE OF DECLARATION!!!
We Love Our Humanity
We Are Important
We Believe in Ourselves
We have made Important Contributions
to the World Everyday
God has given us a
Future and a Hope
Our Lives are Worth Saving
We are Creative
We Have Healthy Minds
We are Thankful
We are Valuable
WE ARE CHERISHED
We have a beautiful presence in our colorful universe, bringing a solid foundation to the generations of people we are inspiring to
LIVE THEIR LIVES ON PLANET EARTH
with
Natural Strength, Powerful Courage,
Educated Wisdom, Loving Self-Care,
Spiritual Development, Focused Faith,
Economic Wealth and Good Health!
= WE ARE GRATEFUL AND THANKFUL TO THE LORD GOD ALMIGHTY!!
-

The Wonderful World of Fine Arts Radio Show with Julius and Shurvon will be on www.rainieravenueradio.world. We will be talking about how we work together as visual artists, our new art projects and goals for the 2020 New Year!!!

(If you are creative/visual artists and want to be a guest on our radio show, send an email to fineartsbydesign@gmail.com)

We currently have our visual art on display at three different locations in Seattle.

2. Art of Soul Gallery in the Columbia City neighborhood of South Seattle. www.rainieravenueradio.world

JuVon Fine Arts Designs started in 2015, we wrote about our collaborative journey for the Brooklyn Art Library Sketchbook Project in 2018. Read about our visual story at https://sketchbookproject.com/library/20304

If you are interested in purchasing an original JUVON FINE ART DESIGNS for your home or office please send an email to fineartsbydesigns@gmail.com with your request and contact information and we will respond within 2 - 4 business days.

Shurvon Haynes is from the Central District of Seattle, she attended the University of Washington, where she studied visual art, social media and journalism. She currently writes about her adventurous journey as a black visual artists living in a global society on her website Black•Art•Designer•Fashion. She also collaborates with custom jewelry designer Julius Brandon of JUVON Fine Art Designs and 'The 'Wonderful World of Fine Arts Radio Show' on www.rainieravenueradio.world. The 'Healthy and Happy Mandala' is their first Installation Art exhibit at the WA NA WARI Art Center in Seattle.

The 'Healthy and Happy Mandala'

"Living in the presence of Black Art

is a magical, spiritual and historical experience.

Black Art is a visual interpretation of the African Diaspora Legacy.

This exhibit will encourage us to learn resilience from the past, optimism to live in the present and preparation for the future."

THE HEALTHY and HAPPY MANDALA