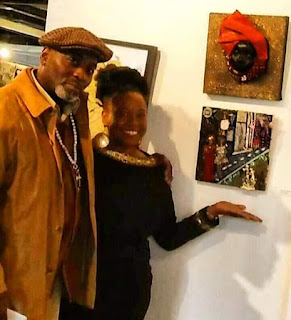 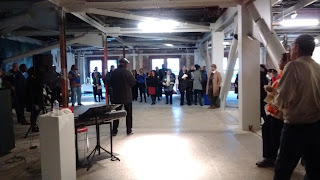 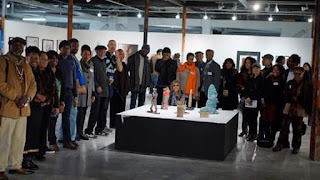 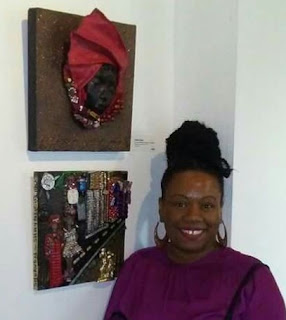 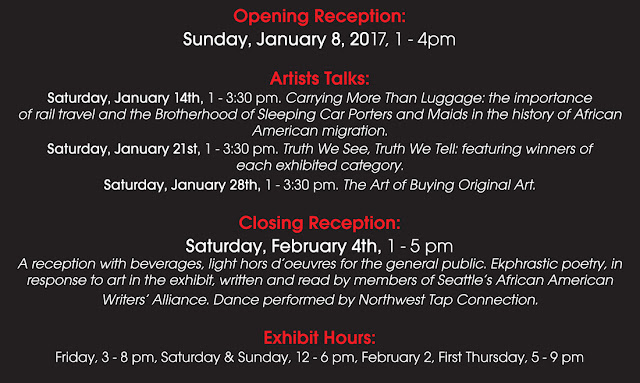 Shurvon Haynes, attended the University of Washington, where she studied visual art, social media and journalism. She currently writes about the importance of global Fine Arts Education on her blog website:
Shurvon Shaynlicia Fashion and Fine Arts Designs. This creative visionary is also the original artists of the annual Fine Arts Theory Designer Series.

Julius Brandon, is a professional jewelry custom fine arts designer. He creates original artwork by redesigning vintage jewelry, beads, stones and decorative objects into spectacular necklaces, bracelets and rings. Julius works in great detail to make his bold statement jewelry come to life with extraordinary color and sparkle. His artwork has been collected by several people for its unique one of a kind creative quality.

The collage paintings featured in this fine arts exhibit are the original paintings of Shurvon Haynes in partnership with visual artists Julius Brandon of Ju's Custom Jewelry Designs.

The creative art process of Shurvon Haynes and Julius Brandon is all about working together to create a remarkable piece of artwork. Julius typically has the general idea while Shurvon brings this concept to life with her talented drawing skills. They both have a love for vintage fashion designer styles which makes their collaborative efforts worth its ECCENTRICITY!
Featuring "Lady and The Gentleman" original art made by Julius Brandon and Shurvon Haynes


The nationally acclaimed exhibition 30 Americans made its West Coast debut at Tacoma Art Museum in September 2016 and has been widely appreciated by local visitors. Enjoy a free day to see it before it leaves Tacoma! Participants can help make a collaborative mural, take part in dance, hear spoken word, tour 30 Americans and TAM’s other exhibitions, and more.
TAM sent out a call to local artists and creatives to gather the best local talent for this festival. Selected by our 30 Americans Community Advisory Committee, this unforgettable line up is one you don’t want to miss!

There were approximately 45 fine art paintings, sculptures, installations and video presentations included in this exhibit, each art piece created by a famous Black African American Visual Artists, on display for first time on the West Coast.

I was truly honored and blessed to have one of my collage assemblage paintings showcased for the last week of this celebrated African American Fine Arts Legacy. Words cannot fully explain the powerful historical relevance of the 30 Americans Fine Arts Exhibit.

The opportunity to see exquisite original artwork made by Kara Walker, Kerry James Marshall and Kehinde Wiley was more than worth the 45 minutes ride from Seattle.
It was if I had reconnected with the spirit of creativity from our enslaved African ancestors as I walked through the museum and witnessed the creative energy in the building.

'American Theory' is also the first painting I have made this year in remembrance to the universal significance of the African Diaspora, as we honor Black African American History in the United States.